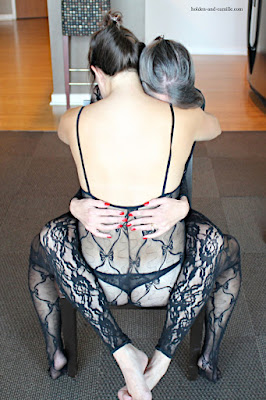 They had met for sex, in a
complicated choreography that let
two wives explore their mutual
curiosity before surprising one
very lucky husband.

They chose somewhere discreet
with a large bathroom where they could
pamper and primp and
drink wine and just maybe
chicken out.

But like turned to lust via the
kisses they remembered practising in
pink bedrooms and smelly cars, the
touches wonderfully strange and
wholly different.

After, they had to bathe,
enjoying their womanliness,
laughing over lingerie,
primped and pampered and
perhaps ready.

A ting-ting told them their
beau was imminent and they
planned arousing poses, one
sat astride the other
erotically entwined.

But breast to breast,
heart to heart, both
beating madly, they
simply embraced and
held each other tight.

(Image used by kind permission of Holden-and-Camille.com to whom I am most grateful and you should go visit. The poem is my imagination and is not a reflection of their lifestyle)
Posted by fridayam at 00:26 2 comments: 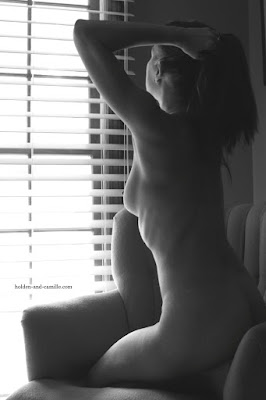 Anticipation made her antsy all day, kept
drawing her back to the window from which
she would see whether her husband was
alone or had company.

She caught herself playing with her hair, something
her mother had warned her against—“It’s a
signal, dear, that you’re interested”—but she
was interested, was curious, was scared.

She knew she should get dressed though she
often greeted her husband naked, but with
someone else it would give the
wrong impression, wouldn’t it?

If she saw him/them arrive there
wouldn’t be time to dress, but
watching was so hypnotic and
waiting was such a powerful aphrodisiac.

(Image used by kind permission of Holden-and-Camille.com to whom I am most grateful and you should go visit. The poem is my imagination and is not a reflection of their lifestyle)